Thailand has been quite the early adopter of digital asset regulation and various blockchain initiatives. Led by the Bank of Thailand’s progressive initiatives, it paved the way for homegrown companies and bank-led projects to be born.

Whether the initiatives lead to wide adoption or success in its respective sectors, is another story.

Thailand introduced in 2018 a full set of laws and regulations for transactions involving cryptocurrencies and crypto assets, bravely setting up the stage as an early adopter. This is relevant for Bitcoin, altcoins and all types of digital tokens relevant to the Thai market.

With that, Thailand opened access to the digital assets market with very clearly defined guidelines and sandboxes. The government body published two Royal Decrees, alongside regulations by the Thai Securities and Exchange Commission SEC, with the Bank of Thailand. Under the finalized framework, digital businesses that deal with crypto assets and blockchain can be set up.

In 2019, an electronic letter of guarantee platform and network participated in by 22 Thai banks and 15 companies in Thailand successfully went live and currently handles approximately US$300M in guarantee letters.

Fast forward to 2020, the Bank of Thailand remains active in the issuance and trials of many digital assets initiatives. Innovation can only happen in this space if the regulations and framework allows.

In the near future, we can probably expect to see regulatory guidance on the tokenization of traditional assets, such as gold, bonds to even real estate.

In this article, Bitesize Finance will take you through the various trials and errors of Thailand’s blockchain and digital assets roadmap, in which we have seen success mixed in with failure and non-starters. Let’s get to it.

Role of BOT and SET

Just as we mentioned above, progress and innovation in this space cannot happen without the regulations set by governing bodies in Thailand. Here, the architects of the infrastructure are the Bank of Thailand (BoT) and Stock Exchange of Thailand (SET).

At the beginning of this year, the SET announced their roadmap for their digital asset platform. Now, fast forward to October, it announced a partnership with Kasikorn Bank’s technology unit, KBTG to build an end-to-end digital assets platform, which should be completed in 2021.

Within the SET’s roadmap for 2020 and ahead, the priority on the list is arguably the fundraising use case. This refers to the ability to issue securities on its platform. In the future, the digital platform should be able to support various products, from digital bonds to investment tokens.

Another main focus is Digital Asset as a Service. If successful, this would allow companies and businesses to leverage digital assets quickly, without having to spend money and knowledge building it themselves. This ranges from donation platforms to mutual fund registrar.

Back in December 2019, the SET announced a collaboration with Cambridge University (Cambridge Center of Alternative Finance) & Blocksize Capital to announce the development of Distributed Ledger Technology (DLT). Blockchain is one technology of DLT, but we can use the terms separately.

Think about the efficiency it would create if all parties would have access to secured information, which would also lead to secured and efficient workflow and reporting.

However, these things always sound great in theory. Applying it is a whole different story.

In announcing the collaboration, the SET focused on four key use cases for Thailand’s capital markets. 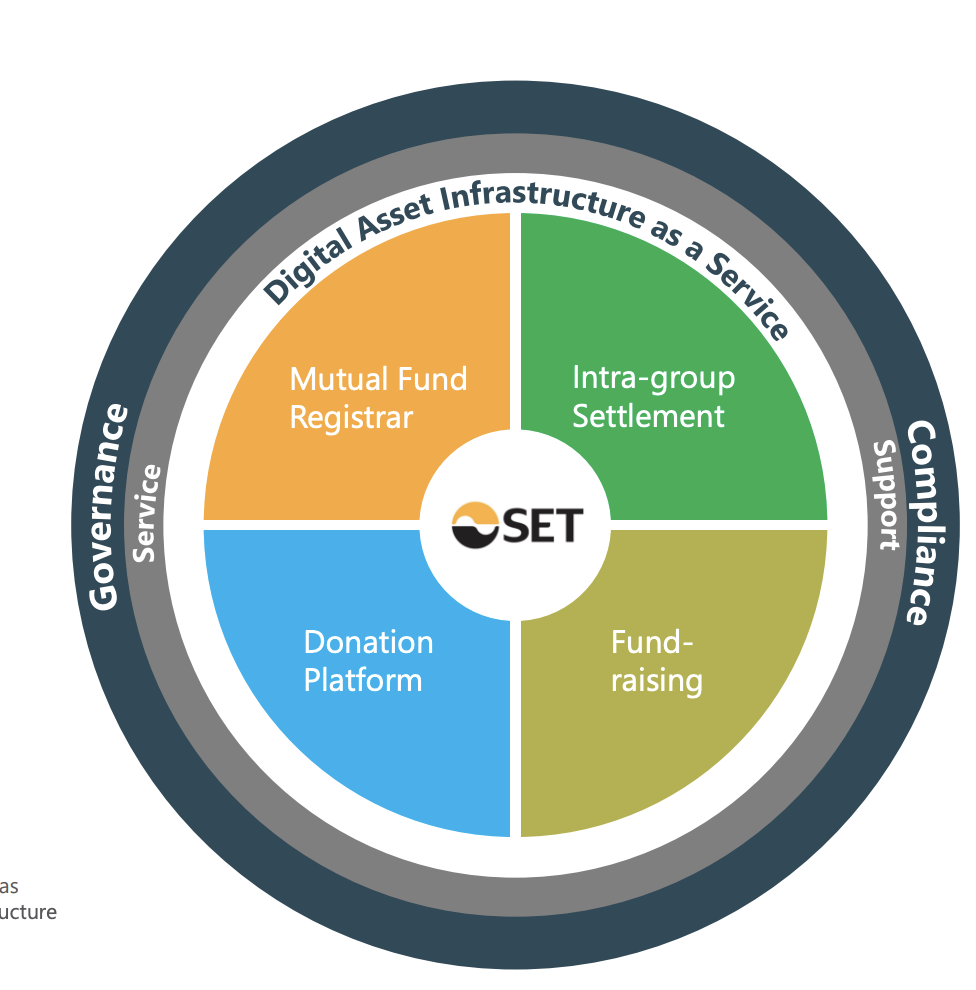 Note that a lot of these concepts are still in ideation phase.

What’s interesting then, is that SET is willing to disrupt itself by setting its position as the pioneer in all things digital assets in Thailand.

Fast forward to now. The SET has announced a partnership with KBTG to leverage DLT based digital asset investment service, from linkage with ICO portals, digital asset exchanges (like Zipmex or Bitkub) to integrations with digital wallets, in collaboration with K Bank.

What this partnership will do is essentially legitimize digital assets and its opportunities, by bringing it to a more approachable mass market.

“The innovative service will not only provide new channels for fundraisers but also create investment opportunities in alternative assets since the enactment of the Royal Decree on the Digital Asset Businesses under the regulation and supervision of the SEC became effective in 2018,” said SET President Pakorn Peetathawatchai.

The Bank of Thailand has also been a key driver in innovation. In 2020, the BoT entered the third-phase development of its “central bank digital currency” (CBDC) and plans to expand its use among large businesses.

The BoT also collaborated with eight leading financial institutions in Thailand to launch “Project Inthanon”, used to study and develop proof of concepts for domestic funds transfer using CBDC. The first project was completed in January 2020 with a successful cross-border transfer prototype, co-developed with the Hong Kong Monetary Authority. More steps to follow.

Earlier this month, The BoT reached a significant milestone when it became the first country to issue the world’s first government savings bond, a total of US$1.6 billion on IBM’s blockchain within two weeks.

The platform allowed investors to benefit from speedy bond issuance, reducing a process that previously took 15 days to two days.

The sale of government savings bonds in Thailand was a complex, multiparty, time-consuming process that relied on a non-real-time system, with duplicated validation steps and prone to data errors. Following this successful use case, the BoT plans to leverage blockchain on all other government bonds targeting both retail and wholesale investors.

We know Kasikorn Bank is co-launching an end-to-end digital assets platform with the SET, but other local banks are also keeping active in the blockchain space. Siam Commercial Bank paved the way via an investment in San Francisco based blockchain company Ripple back in 2016, in order to utilize the platform’s cross-border remittance payments expertise.

This is the same company that issues digital coin XRP.

Fast forward to 2020, SCB now enables customers to instantly (or 3 days maximum depending on the destination) transfer money abroad via SCB Easy app using the Ripple technology, effectively cutting down a lot of time and effort. Another perk? It’s a 24 hours service.

Thai corporates are also trying their hand at remittance and addressing the problem of cross-border payments. Velo is a Thai blockchain company backed by CP Group’s Chatchaval Cheravanont. The platform targets the 5 million migrant workers in Thailand who need a convenient way to send money back home with lowest fees possible. It leverages CP owned 7-Eleven’s reach to allow deposits and withdrawals of money as well.

Cryptocurrency trading in Thailand has saturated somewhat to the mainstream, but has yet to reach the heights of stock trading. With regulations paving way for regular cryptocurrency trading via apps, it’s more accessible than ever to try your hand at trading bitcoin to digital gold.

We touched on digital assets earlier on in this article. Another term for digital assets is tokenized securities, which to put it simply, allows you to issue a blockchain token (specifically, a security token) that digitally represents a real tradable asset, from real estate to paintings.

Ownership of the asset is represented by ownership of the token on the blockchain. Think of it this way, if you’ve always wanted to own a collectable painting, but can’t afford the whole canvas, you can own a fraction of it via tokenization and benefit when the price surges. Fractional ownership could provide sufficient funds for your life and goals, when understood and studied carefully, of course.

The perks? As well as opening up new avenues and access for investment,

The trend is slowly coming to Thailand. Take digital assets exchange ERX, which was granted a license to operate as a regulated digital asset exchange from the SEC in July, the platform aims to list three asset backed digital tokens within this year.

ERX’s biggest shareholder is New York based Elevated Returns group (ER), most known for its tokenization of the St. Regis Resort in Aspen.

ERX is planning to issue one real estate related token, as well as utility tokens in the future. Note, a utility token offers a right to use a product or service, but it is company or platform specific.

This could be an up and coming trend for younger investors in Thailand, or those who are simply digitally curious to dip their toes in the new world.

Since the Bank of Thailand and regulators became active in setting up frameworks and ensuring that regulations were in place to advance Thailand’s progress in the digital assets space back in 2018, we have seen significant progress.

From the birth and adoption of various cryptocurrency exchanges, to local ICOs and even collaboration from local banks in regards to cross border payments. The blockchain and digital asset space has been active, but perhaps from a very institution and government led point of view.

Many successful projects remain government led and pioneered by big banks. There is still a lack of understanding and mass adoption in the world of blockchain and digital assets in Thailand, which is common for developing economies.

The regulations in place make it easier for innovation to be born, the key takeaway? Thailand got a good head start in the digital asset space, and with the upcoming collaboration between SET and KBTG, mass adoption could be nearer than expected. 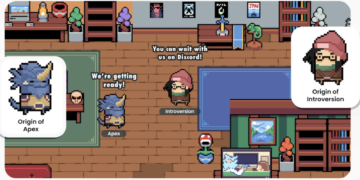