Bitesize Guide: The People & The Political Parties in the 2020 US Election 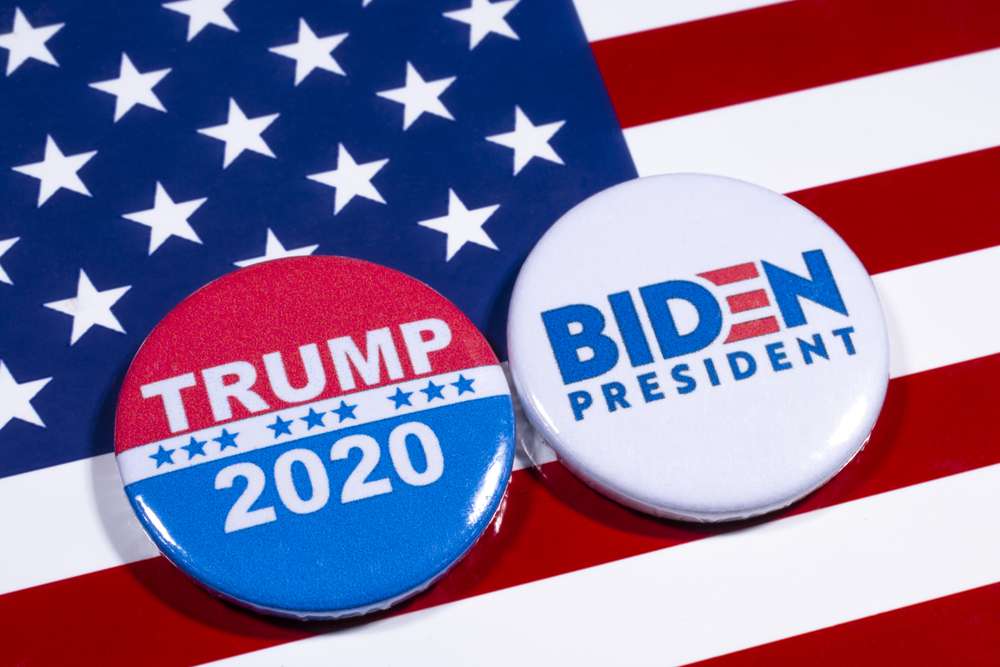 The Candidates in the 2020 US Presidential Election

So, you know the two nominees; President Donald Trump and Former Vice President Joe Biden, but do you know how distinctively different they are on several key issues? Policies and issue stance is crucial to a candidate’s path to Presidency. Unlike in Thailand, where our political parties do not have strict stances on party ideology, its very different in the United States.

Over the course of the Presidential campaign, both candidates debate on topical issues, ranging from the covid-19 pandemic to job creation and immigration.

The debate format is designed for viewers to understand their candidates’ stances on important issues. Want to see how Trump and Biden differ? Check out the table below. 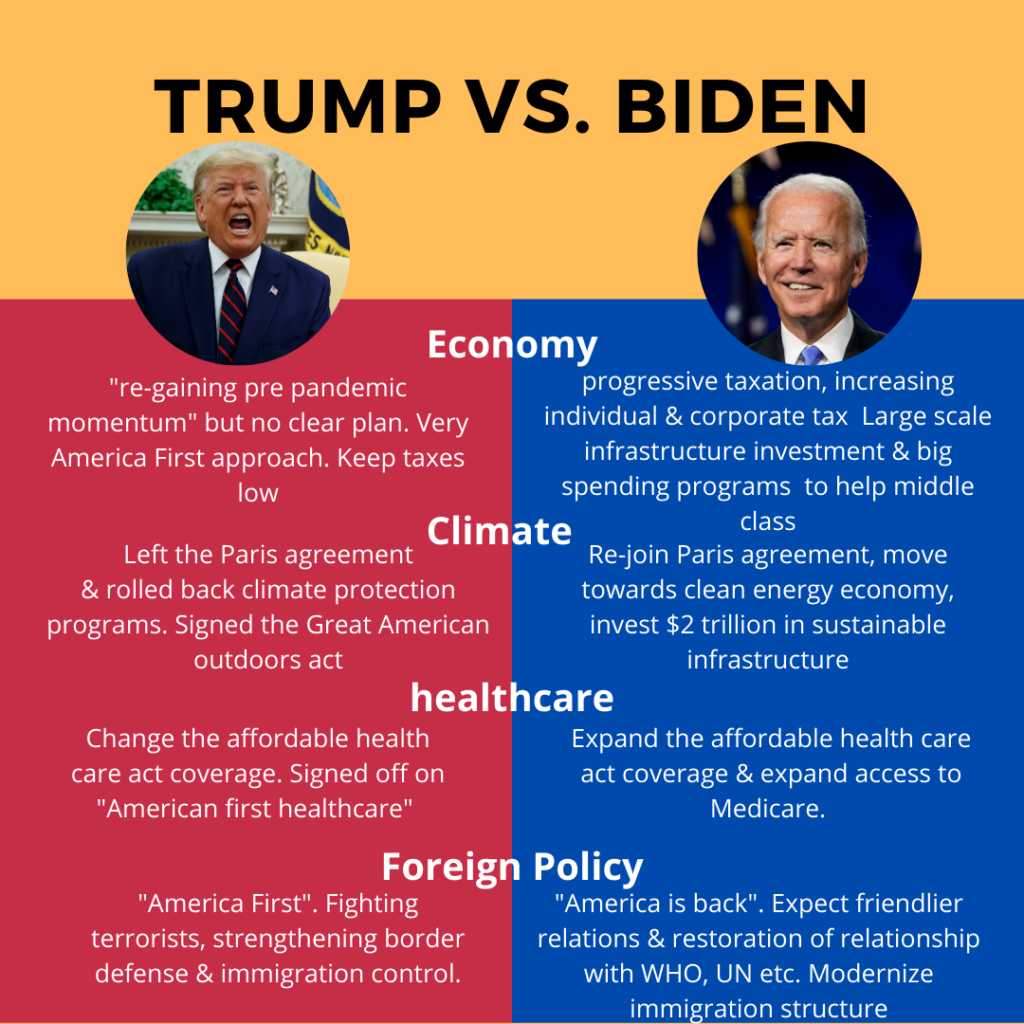 It’s safe to say that a Biden Presidency would look inherently different to a Trump presidency. Biden would focus on retreating from the “America First” rhetoric by re-entering the Paris Climate Agreement, as well as mend the US’s relationship with the World Health Organization (although its effectiveness is up for debate).

What the world would also be watching in light of a Biden win, is how the US’s relationship with China will evolve.

This is not purely due to individual differences between the candidates, but also very different ideologies from the Republican and Democrat Party.

Again, differently to what we see in Thailand-the United States primarily has two big parties; The Republican Party (also known as they GOP) and The Democrat Party. This is what we refer to, when we talk about red and blue states (red: republican, blue: democrat).

Both parties have differing positions on ideology, philosophy to more issue based beliefs such as gun control and abortion rights. Here is a table to make things slightly clearer. 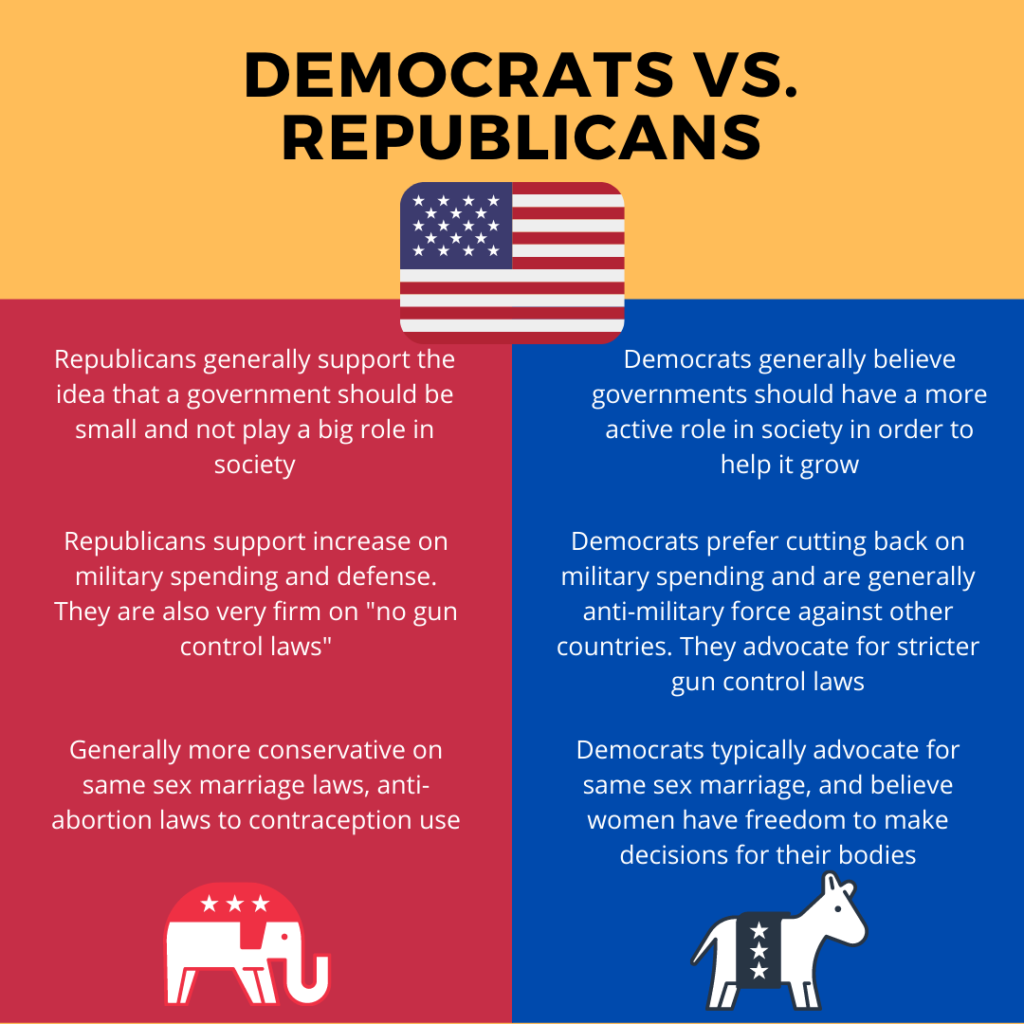 The stark differences in ideology means that more often than not, both parties are often locked in misunderstandings. This can happen in parliament, simply because of the political structure that allows the opposing party to take control of the House even if your party has the Presidency. We break it down.

Congress is the legislative arm of the government and its their job to make laws.

Therefore, a smaller state with a small population may be underrepresented in congress.

Differences Between the Senate and the House of Representatives

The House and Senate are equal partners in the legislative process—legislation cannot be enacted without the consent of both chambers. Therefore, sometimes it takes months or longer to pass a law from the opposing party, if they do not have the majority in the house or senate.

There are some key differences in responsibility: The Senate ratifies treaties and approves presidential appointments while the House initiates revenue-raising bills.

The parties actually have to battle it out to control the senate and house. Here’s a brief illustration.

Among the 35 Senate seats up in 2020, 23 are held by the Republicans. Democrats will need to gain three or four seats to take control.

Here’s an example of how this works in real life. In 2012, when President Barack Obama won his second term as a Democrat President (so, four more years in office), the Republican Party maintained their hold on the House of Representatives. Therefore, the Democratic majority in the Senate was very small which led to a lot of bickering and resistance from the Republicans, which in turn, caused gridlock in passing bills and laws.

The Constitution of the United States divides the federal government into three branches to make sure no individual or group will have too much power.

This is a very simple who’s who guide to political ideology. If you’re still interested or confused, we recommend you to look up these resources below.

How Does the US political system work?

Here’s the full Bitesize guide to everything about the 2020 US Presidential Election.