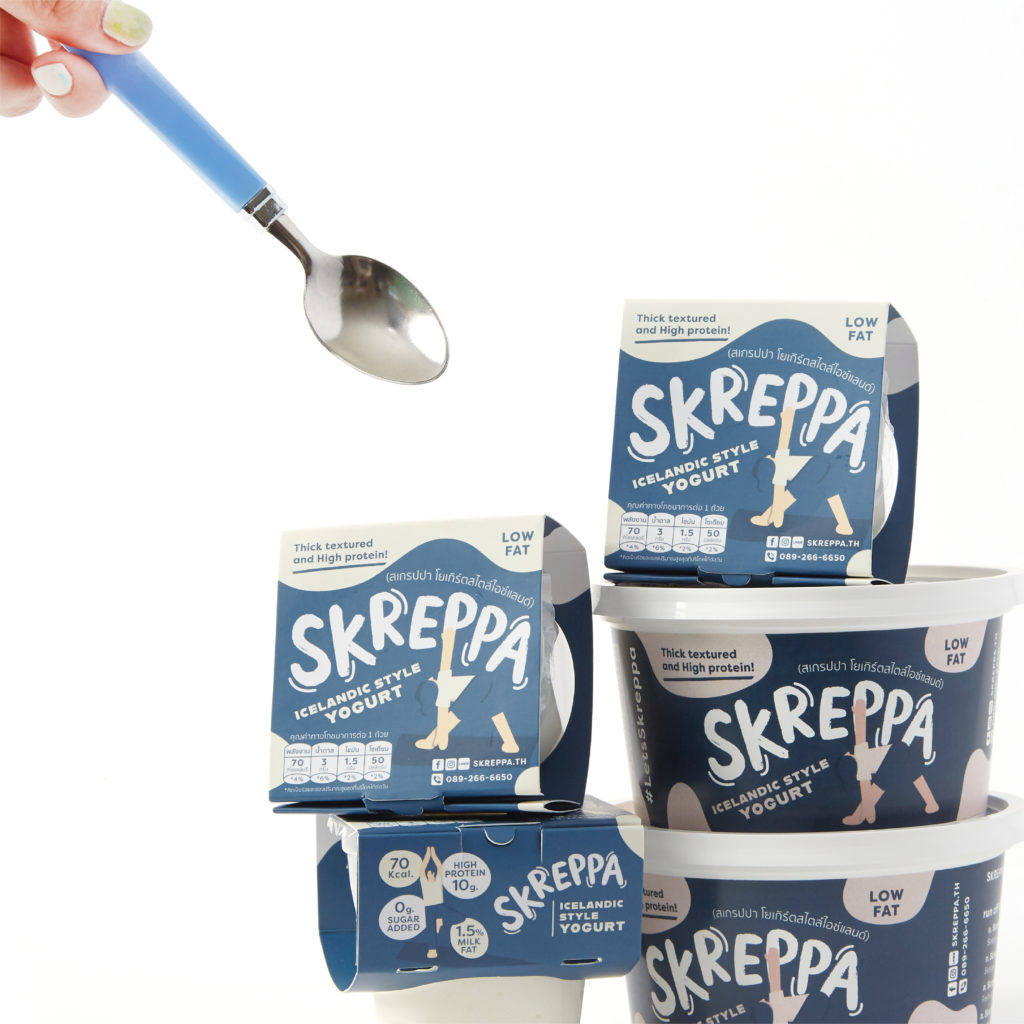 Are you one of those people that are serious about their breakfasts? In order to jumpstart the day, you may need to grab something quick and healthy whilst balancing coffee on the other hand.

People say breakfast is the most important meal of the day, but we think that’s relative to what you eat on a daily basis. If you’re a yoghurt kind of person, there’s just a lot of brands to choose from on the supermarket aisle alone.

Did you know though, that a cup of 0 fat flavored yoghurt typically has quite a bit of sugar in?

Enters Skreppa, a Bangkok based Icelandic yoghurt brand founded by three friends; Suthinee “Honey” Sriphoosanaphan, Kamolmas “Mint” Thongyai and Pimyada “Puifye” Kuansataporn, who discovered their love for high quality, natural yoghurt whilst on their study abroad. Skreppa was initially started by Suthinee “Honey” when she came back from a year abroad in Paris, where she spent time exploring the city’s vast breakfast goods selections.

This led to the common question of, “where can I find this back home?” which led Honey to pursue her own brand.

First off, let’s get the important things out of the way. Skreppa’s unusual name means to go off for a little while, a mini escape of some sort in Icelandic.

Secondly, less is known about Icelandic yoghurt in Thailand compared to Greek yoghurt. The key difference between them is that Skyr (Icelandic yoghurt) is typically thicker and concentrated, and actually healthier for you.

“Skyr actually has much more protein and calcium compared to Greek yoghurt,” says Honey. “It’s filled with vitamins and minerals, and typically lower in sugar and carbs compared to most yoghurts.”

A cup of Skreppa is 70 calories, and good calories too, which means it works well as a grab and go breakfast or even as a healthy mid afternoon snack.

Currently, consumers can buy Skreppa yoghurt from Villa Market and Tops Supermarket, or directly from the brand’s instagram page and Line account.

“When I came back to Bangkok, I got started right away and began searching for OEMs (Original Equipment Manufacturer) that we could potentially work with,” says Honey.

The concept to market process took almost one year and Skreppa was born in 2019.

“My manufacturer works with a lot of SMEs, which means they don’t require massive bulk orders and this suits our product and shelf life” says Honey.

One of the challenges in creating and then selling a food product is the process of asking for FDA approval; something all food related entrepreneurs have to go through.

“I learned a lot through that process,” says Honey, “the sheer amount of very specific and minor details required was a lot-everything from the lettering of labelling to exact amounts of measurements.”

After getting over those early hurdles, Skreppa was ready to launch. Honey and her team started sending samples to different health influencers on Instagram and began seeing traction. Soon after that, Skreppa got into Villa Supermarket and Tops as well as selling online.

Since then, they also began collaborating with different granola brands, in order to get people to be more creative with yoghurt and in some ways, incentivize people to explore different ways of enjoying the nutritious product. 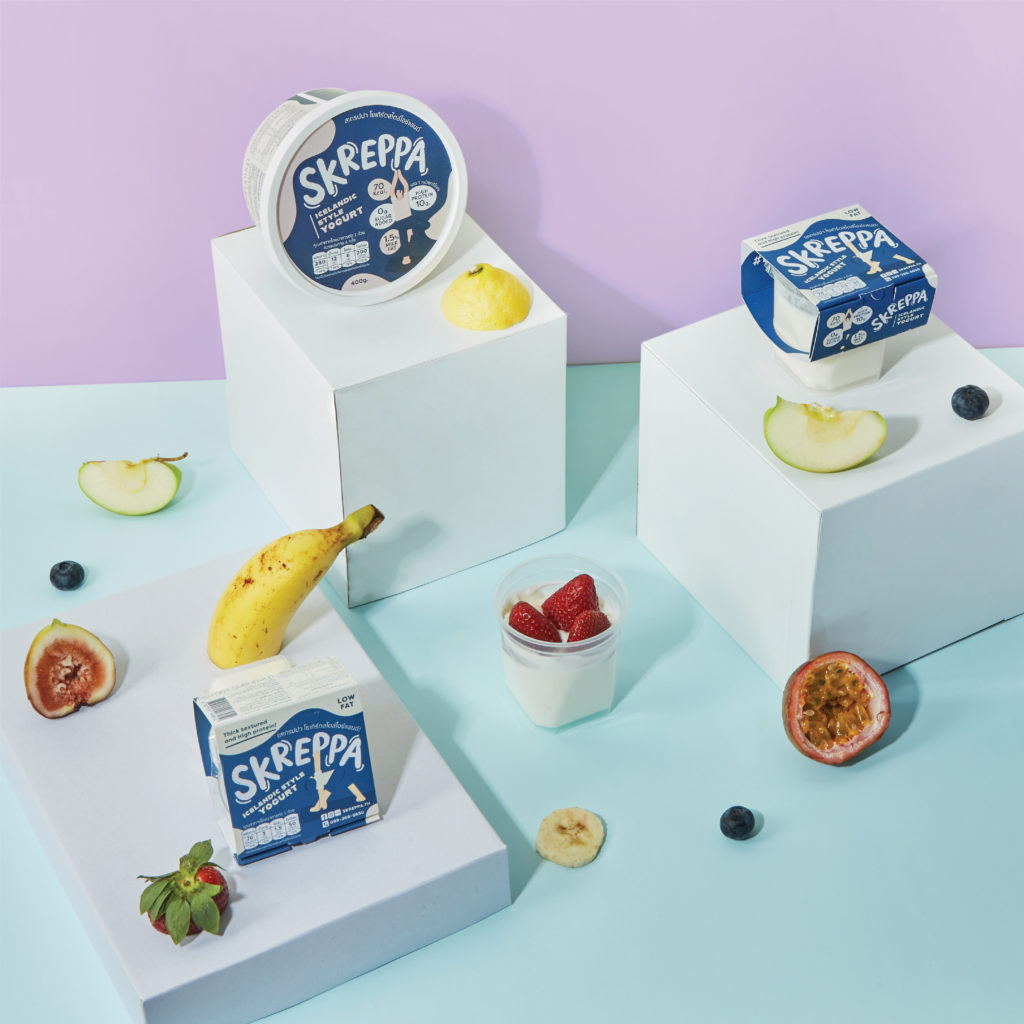 “One challenge about selling yoghurt is the shorter shelf life,” says Honey. “Our products last between 25-30 days, which means we have to sell our entire stock in that time.”

Another challenge is to do with the product itself, Because Skreppa is a food product that needs to be chilled at very specific temperatures, the supermarkets themselves need to store it in the correct way.

“I remember one time where a customer found a Skreppa pack that was slightly off because it wasn’t chilled properly, and we had to replace that order, it really made me conscious of the small but important details,” says Honey.

Aside from the practicality factor, there’s also that niche breakfast challenge-especially with Icelandic yoghurt where people aren’t quite familiar with the thick texture.

“Yoghurt is one of those products that you either like or not. It’s difficult to incentivize people to take that extra step to buy if they don’t regularly eat yoghurt. However, for the breakfast market, they’ll pay close attention to nutrition and stuff, which is good for us since Skreppa has a lot of health benefits.”

One way the Skreppa team tackled the familiarity challenge was to regularly participate in food markets and booths, so they could have people sample the product as well as receive in person feedback; something that is still valuable for consumer brands. It was through offline events, that the team realized an untapped potential they could explore; plant based yoghurt.

“Whilst we cater to a health conscious crowd, a lot of people in this segment don’t eat dairy, which remains a challenge” says Honey.

“We’d like to expand our product line and potentially add a plant based product,” says Honey. “There’s a clear cross over between our customers and the plant based segment. This is what we’ve seen when we meet customers at events, they ask when we’re coming up with a vegan yoghurt.”

Ultimately, the challenge for premium consumer goods is that you often find yourself between wanting to go mass for expansion, or to further carve out your speciality within a category with more products. Skreppa is well positioned to capture a growing health and wellness market in Bangkok, one which is growing as spending power increases among their customer group.

How do we know this will change in the future? Consumers are simply becoming more aware and proactive in choosing brands, just look at the amount of new players and markets popping up.

“The goal is for more people to recognize our brand and product or at least break out of their comfort zone to try it,” says Honey. 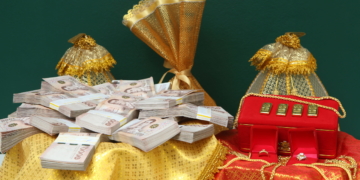 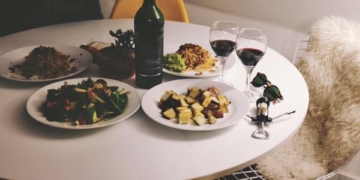 A Wine For Any Occasion: 6 Must-Haves To Keep At Home 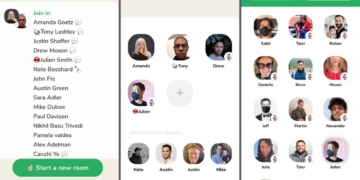