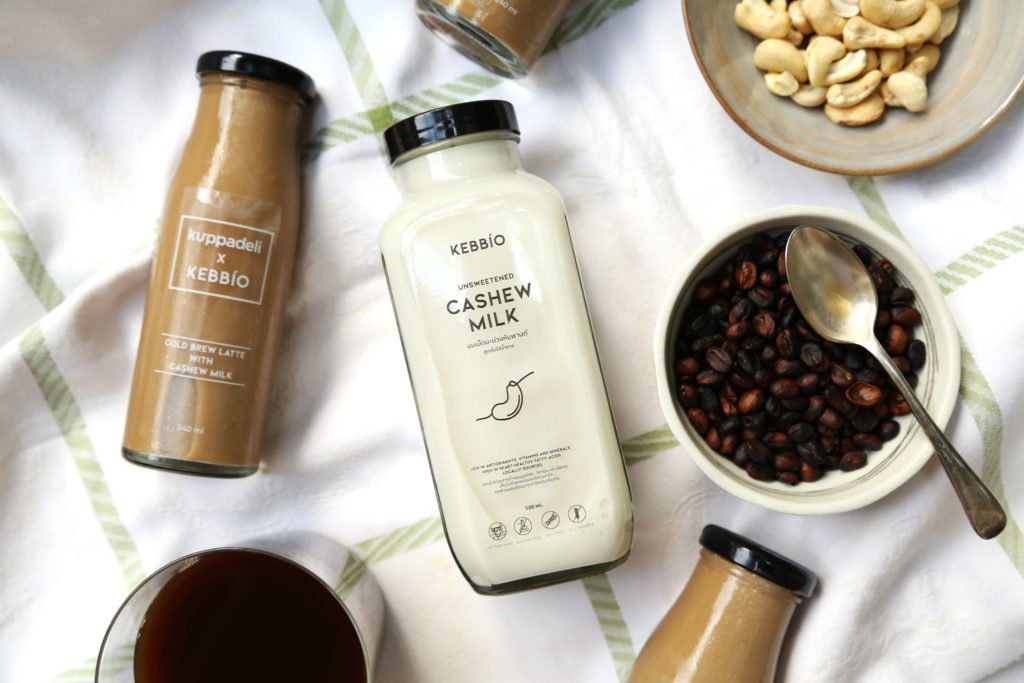 The global appetite for alternative milk continues to grow. First there was the LA market to conquer, then came New York, then it trickles down across the world to mature Asian capitals like Singapore and then to Bangkok.

The metrics and the surge sounds impressive. But how do we break down the story behind the data? One way to validate growth is simply to observe mass adoption. In Bangkok, it’s already becoming a trend to offer oat/soy milk with your customer’s latte.

Between now and 2025, the global alternative milk market is expected to grow by 11% each year, and young people are more willing than their older counterparts to swap dairy for plant based milk. However, finding the right brand as well as the right kind for you in terms of taste and even creaminess, can be a challenge.

We sit down with Zaza Vongkusolkit, founder of Bangkok based cashew milk brand, Kebbio to talk about all things milk, sourcing the right cashews and the plant based milk industry at large.

Kebbio is a “sustainable health and wellness brand with a mission to raise the living standards of everyone including marginalised communities,” says Zaza. “I created this social enterprise to help bring suppliers and consumers together so that we can all work together to become better in every way.”

Better in this sense is a blanket term for the quality of product, for the supply chain and players involved, such as farmers and the traceability of the process.

The name KEBBÍO is portmanteau of the Thai word ‘keb’ (which means keep), and ‘bio‘ (the Greek root word for life).

And why cashew milk? Kebbio is kicking off with cashew because its locally sourced goods, and through cashew being locally sourced, it helps the local Thai community as well as contribute to a low carbon footprint. What else? Cashew adds a good texture to a hot latte.

The interest in cashew milk for Zaza began authentically from her dislike of soy milk and in her own kitchen. “I wasn’t able to find a good alternative-milk cappuccino because the frothing wasn’t stable enough so I decided to experiment with making my own.”

Compared to its soy milk counterpart, cashew is still the plant based milk industry’s up and coming sibling, but Kebbio has a long term play at hand, and Zaza herself understands it takes time to shift consumer behavior from something they’ve lived with their whole lives, to adapt to a new niche.

The market opportunity in Thailand

“It’s in the early stages in Thailand, there aren’t many local brands on the market yet and whatever’s available are mostly imported products, which means a higher price tag.”

The trend is growing though, albeit still a niche community. There are more and more small home-made alt-milk brands that sell on Instagram, due to the low barrier to entry. Consumers are becoming more open minded about alternative, plant based milk but the market demand has not yet caught up with Western markets. However, the landscape is still filled with more westernized customers who may have more exposure to alternative milk and are less cost sensitive.

“Existing players might have a very specific following because it’s a pretty niche market,” says Zaza.

“Interestingly, more people are switching to plant-based because Asians are mostly lactose intolerant and they’re only realising now.”

There’s a perception challenge though, a lot of people still assume that regular dairy is healthier for the body compared to plant based alternatives.

“Ultimately, there has to be a vision and a mission for a brand. As a social enterprise and a green company, we’ve got a few sustainable development goals we want to tackle. One of them is good health and well-being for all the stakeholders of KEBBIO, including marginalised farmer populations,” says Zaza.

This is the vision: for Kebbio to grow into a bigger platform that advocates for social responsibility, affordable wellness and to be sustainable. Cashew milk is the first product, with more plans in the pipeline.

Currently, Kebbio runs on a small production line and everything is made in the same kitchen every morning in order to ensure the freshness of every bottle.

“We source directly from our farmers across Thailand and visit each farmer before we commit to their produce in order to make sure that their cashews are organic, and that the farmers themselves are adhering to sustainable farming practices,” says Zaza. “We regularly visit the farms to get to know our suppliers better and to stay actively involved. It’s become a whole big family.”

Kebbio currently outsources their daily deliveries to a third party logistics player, because it’s literally still a startup without its own fleet. Ordering from Kebbio is straightforward, customers can simply add the shop on LINE, chat and place an order with same day deliveries available for orders placed before noon.

If you decide that you need your daily dose of Kebbio cashew milk, then weekly/monthly subscriptions is also available. This makes sense going forward, as milk is essentially a kitchen staple, and by making alternative, plant based milk accessible to your consumer base, it heightens the chance of product stickiness.

If you search for Kebbio on Instagram, you’ll see it’s not just about commerce. It’s a carefully curated, colorful platform that also educates followers about the benefits of plant based milk, dives deeper into the vitamins and minerals, as well as some easy breakfast recipes.

“We started our instagram page a little over a year ago, with only a handful of followers, it’s slowly growing into an interactive community but there’s still a long way to go.”

It’s sometimes difficult to gauge the effectiveness of marketing efforts, but the takeaway here is that you just keep going. When you’re trying to inherently shift behavior, it’s best to do it in pastel colors!

“The most challenging thing about running Kebbio is that people sometimes get confused about the product and it’s hard to explain that Kebbio isn’t just a cashew milk brand, but it’s a sustainable health and wellness brand with cashew milk as one of its products,” explains Zaza.

Another challenge? Misconceptions. “Just because its vegan doesn’t mean it’s healthy. Oreos are actually vegan. The best thing is to self educate, there’s so many resources these days and try not to use blanket statements. Always be an informed customer,” says Zaza.

It’s becoming easier to become an educated consumer in the hectic 21st century world of commerce and information overload. This is why it’s also becoming easier to launch a brand, albeit a smaller scale brand as there are plenty of tools and distribution channels to pick and choose from. The likes of Line, Instagram, Facebook to marketplaces such as Lazada and Shopee means that opportunities (and competition) is endless.

Currently, Thailand’s plant based milk industry is just starting out. If you wander around well curated cafes in Thonglor, it’s likely that you’ll see oat and soy milk on display, and this means the product is still catering to a small, but growing market.

Kebbio isn’t here to push cashew milk down your throat, but simply to educate, interest and hopefully turn you into a believer of accessible, be good and do good consumer products.

“Ultimately, we believe that what’s good for the body should also be good for the planet and we shouldn’t have to choose, it’s as simple as that.”

Where to buy Kebbio products