So far, this year has been a continuous development of 2021’s NFT, digital assets, and blockchain-based game frenzy. Last year, we began to see the mainstream awareness and adoption of various blockchain-based Metaverse universes, from The Sandbox to Roblox.

In 2021, The Sandbox reported a sharp rise in users and now has over 500,000 monthly active users on its platform. The mainstream adoption is real and this has opened up the demand for other Metaverse platforms and other means of monetization through the digital space.

Enter Chillchat. A social metaverse platform where players can interact, hang out, and play together in a digital pixel art world, powered by NFTs. Chillchat is fresh off a US$1.9 million seed equity funding round, led by Solana Ventures, Griffin Gaming Ventures, and other funds, and is aiming to close a US$5-6 million seed token by end of Q1.

We spoke with Chillchat’s co-founder James Au during his company retreat, to get the full rundown on the universe.

“Chillchat enables players to interact and have true digital ownership of their stuff, such as characters, pets, items, and pets,” says James. “We allow players to become their NFTs in the virtual world, as well as buy-sell and trade NFTs with other players for real-world value.”

The real niche of Chillchat is that it allows players to develop the ecosystem, providing them with the building tools to construct and build their own playground, using Solana tokens of course.

Chillchat will be going live at the end of April for active Solana community participants, those with the know-how and industry familiarity to help construct what the platform will eventually become. The platform will soon open to just about everyone with a crypto wallet and Solana tokens.

“The tools we provide are easy to use, making it easy for players to create and share. Even casual players will be able to participate,” says James.

“Social interactions have changed for sure since Covid,” he says. “There will definitely be room for social and offline things, but also a place for Metaverse. We want to be in parallel between those things.”

James came up with the idea for Chillchat in 2018, as a mobile platform. However, he was busy with other projects and businesses. Fun fact, we interviewed James last year for his Lucky Panda chain in Bangkok, which serves Asian American favorites.

“I’ve been obsessed with virtual worlds and online games since I was a kid,” he says, “and I always thought there was room for a user-generated content virtual world, where characters weren’t created by a company but by users.”

Fast forward to 2021, James was permanently living and working in Bangkok, and got involved with NFTs.

“I profited quite well from NFTs, so it led me to do a deeper dive and realized that the idea I had in mind back in 2018 would fit well with this growing trend. Then, I decided to fully commit to building the product.”

So, without the tech jargon. What exactly is Chillchat?

The platform is a social metaverse, a “Roblox meets Pixel Art and NFTs,” says James. 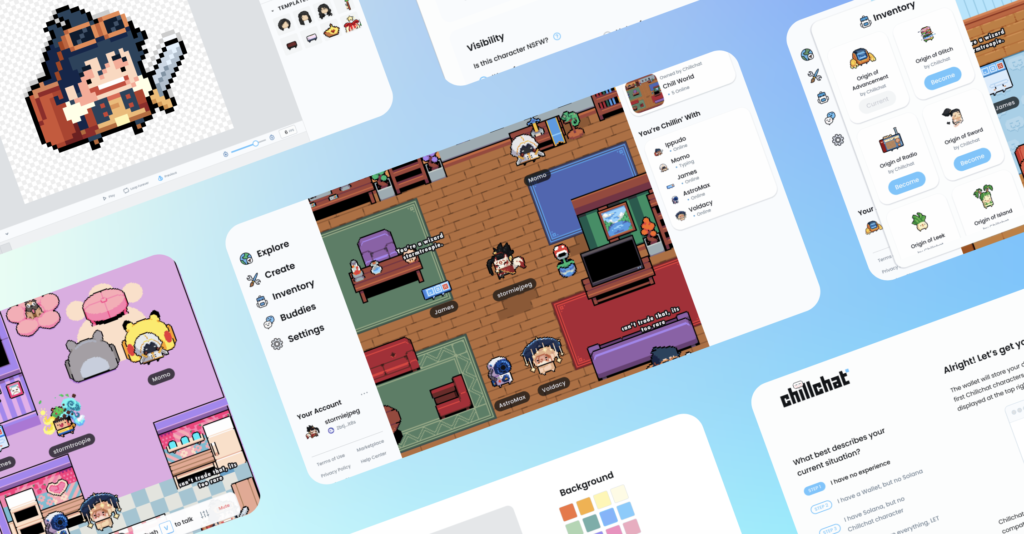 For nongamers, Roblox is a leading virtual gaming platform that allows users to play and create games in the universe. Brands such as Nike, Vans, and Forever21 have collaborated with the platform.

“In Roblox, users are able to create content in terms of 3D characters, props, and more. In this sense, Chillchat is similar to it,” says James. “However, our key differentiator is that our pixel art makes it so much easier to design and create.”

Pixel art’s 2D art style enables simple integration and creation, making it more accessible to casual players. With Roblox, 3D models are created using professional tools such as Blender and Unity, experience and technical skills are involved. Chillchat builds tools directly into their web and mobile platform allowing players to quickly and easily create all in one platform.

By making it accessible for people who may be intimidated by the technical jargon, Chillchat is well-positioned to capture casual players and first-time creators.

“They can purchase their first NFT and easily jump into the universe,” says James. “To begin, just download the Phantom wallet onto your browser and purchase one. Once you have that, other things will begin to make sense.”

Chillchat is powered by the Solana blockchain, which gives it a lot of flexibility and benefits.

“Solana is a blockchain that is designed for mass consumer use,” says James. “It’s simple, fast with low costs. This makes it the ideal technology for us as we are targeting a broader consumer audience.”

Solana has gained mainstream attention this past year, with its multiple flexible use cases underpinning the token value and sending SOL surging by 17,500% in 2021.

And the universe itself is centered around NFTs. How does this work?

“When you purchase an asset on Chillchat, it truly belongs to you,” James explains. “The assets exist in your wallets, unlike a lot of other games where you don’t own the assets and cannot take it out of the game.”

NFTs in Chillchat allow you to buy, sell or trade your assets with other players.

“Think of it like owning Pokemon cards,” he says. “When you buy a deck of cards, you own it and can keep it in your wallet or drawer. This is exactly like that, but virtually.”

In some other games, when you make an online purchase you may think that you have ownership but terms and conditions would say otherwise.

To kickstart the process, the founding team created 1,500 characters and these “Origin” NFTs were created to act as gods of the Chillchat universe, the first heritage which will eventually become the beginning of all future lineages on the platform.

The characters were auctioned for 2 SOL and were recently trading at 30 SOL.

“The lineage is like an ancestral family tree,” says James. “It will become a way to trace creations back to their origin within the metaverse.”

Each character on Chillchat represents their concept, from Zodiacs to the 7 deadly sins to more playful ones such as food.

Chillchat also gives out $CHILL tokens to incentivize creators in the game, but players themselves can also passively earn the tokens just by staking. The token is used to govern the platform as a DAO.

“Players, creators, and investors can stake their tokens and passively earn more, and this is the only way aside from Origin ownership to get tokens. Otherwise, you’ll need to buy it off an exchange,” says James.

By encouraging better content, more and more players and participants will use the token and increase its value. The ecosystem play means that the token will increase in worth and grow in use cases.

“Chillchat is not a Play to Earn game,” says James. “We are a “Create to Earn” social metaverse which means players can create content, trade it or sell it with other players. This is similar to real-world economics where there are producers of goods and consumers who buy.” 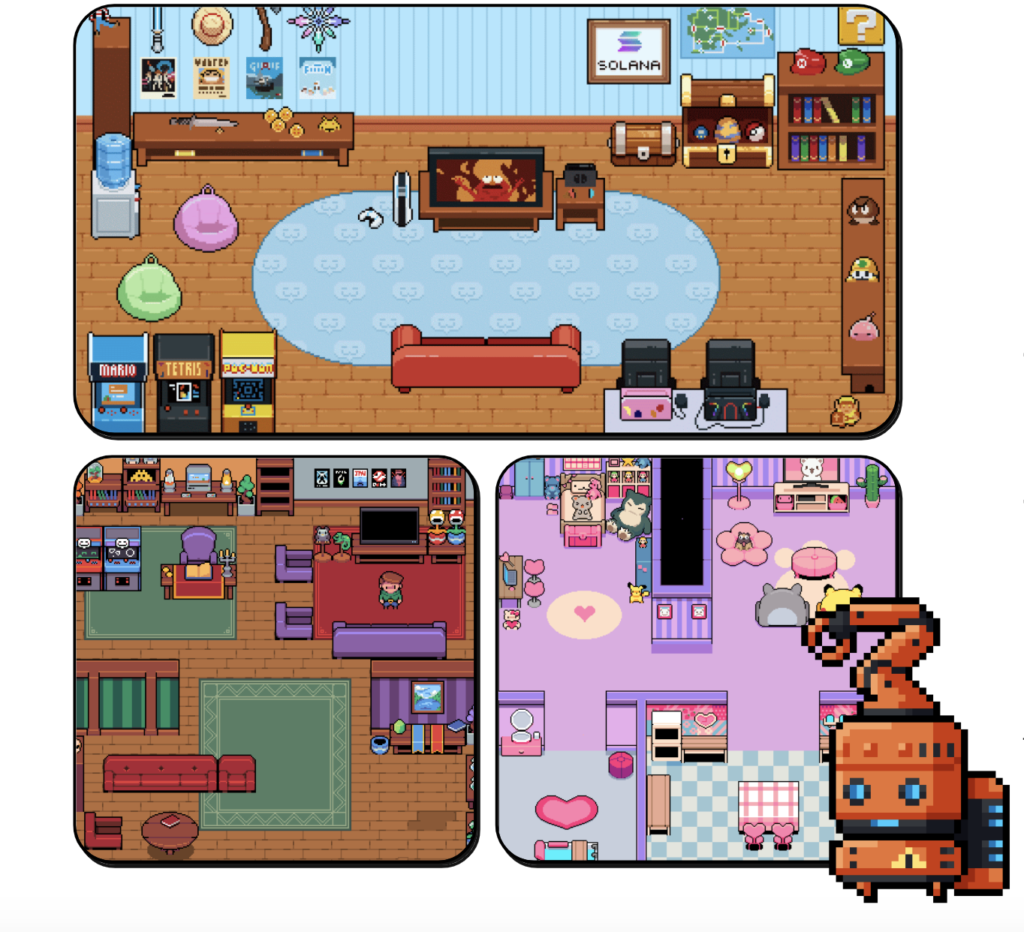 “The funds raised will be used to grow the Chillchat team and build a product so we can create a place people really want to hang out,” says James. The team is expanding, and the company is looking for talented software developers, game developers, quality assurance, business intelligence, designers, marketing, and growth. The Bangkok office is located at True Digital Park, and James says they are actively recruiting, so you heard it here!

Chillchat is also soon closing their Seed Token round at US$50 million token valuation, where the company is eyeing to raise US$5-6 million in additional capital. This round is led by FTX Ventures and Crypto.com Capital.

Big things are happening here. There’s no better way to learn about evolving innovations than to jump in and try for yourself, see you on Chillchat?